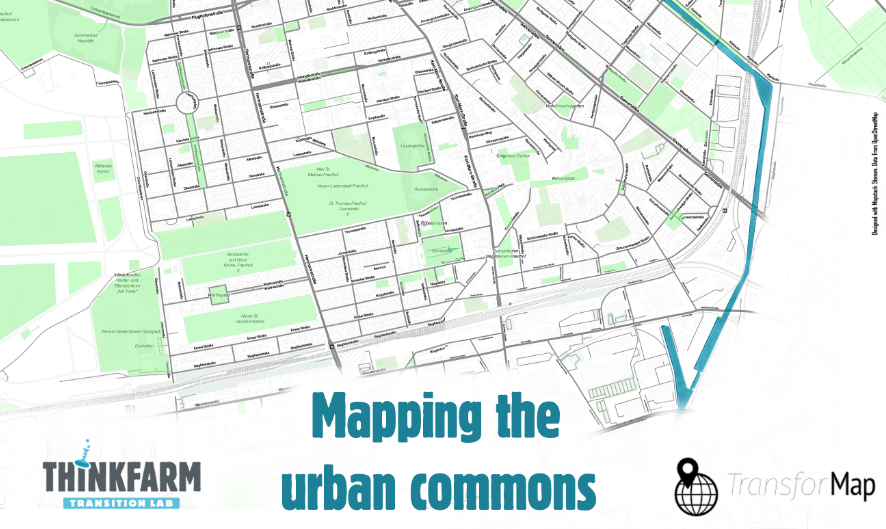 What parts of the public space are already used as commons? What could be turned into a commons? Could we use urban commons for a circular economy? Those are the questions that will drive a map jam built around a bike and mapping stroll accross the streets of Kreuzberg and Neuköln on Saturday 13.06.2015, starting 11AM at Thinkfarm Berlin (registration and details here). This event is a contribution to the Open Source Circular Economy Days that gather people who apply the open source methodology to build a circular economy. Our take is to start looking at the urban space and its untapped resources. By using maps, we propose participants to locate activities that already contribute to circular economic flows and opportunities to tap into underused urban space. The open source methodology encourages us to see how people, beyond state and market, can self-organize to develop, curate, maintain shared resources as commons. The map jam unfolded in three steps:

Forming groups and preparing for the bike mapping expedition

Gathering the harvest and discussing challenges of mapping

Online map of the location mapped (work in progress). You can check the following hashstags that were used during the map jam to tweet locations: #mapurbancommons #mappingurbancommons

This map jam and tour is organized by Thinkfarm’s transition»lab as a contribution to the Open Source Circular Economy Days Berlin and the MAKE CITY festival 2015. This event is supported by the TransforMap community and its Mapping Month May. Check the attendants list online online. Want to better understand what open source means? Check OSCE great video below:

One thought on “Mapping the urban commons by bike: experimenting onland mapping”

PhD student at Humboldt University in Berlin. Researching the interaction between the collaborative internet and sustainability transitions Contributor of Transformap initiative Co-founder of the transition>>lab at Thinkfarm Berlin
Loading Comments...
%d bloggers like this: