This is an intermediary report of exploratory case-studies that I am conducting as part of a research on grassroots mapping initiatives that contribute to a socio-ecological transition. The research generally tries to answer two broad questions:

This research is part of a PhD project (link) and contributes to inform the TransforMap initiative[1].

For this first round of field research[2] I selected three initiatives that operate at different levels: local, regional/nation, and global.

Living Lot (formerly 596 Acres) is an online platform that is built around of map of New York (USA). The map shows all lots that are not used (brown fields usually), as well as lots where people are already organizing to reclaim its use for community gardening. For each vacant lot, citizens can find specific information regarding possible use and contacts of the owner (private or one of the 16 city agencies managing land…). The website then provides very concrete information on how to organize a community garden from the application to a city agency, the subscription to liability insurance, to actually running a self-organized garden. The online process is mirrored by an intensive offline work in the communities ranging from events, training, to map printouts on fences of vacant lots: from its very initiation, the offline action has been the main goal of Living Lot: its 3 employees and dozens of volunteers.

The Alliance Paysans Ecologistes et Consom’acteurs (PEC) is a French association that since the early 2000s acts as the main supporting organization for the community supported agriculture (CSA) movement in the Rhône-Alpes region in France and a part of the national federation MIRAMAP. After a strong growth in the 2000s, there are over 200 AMAPs (CSA in French) in Rhône-Alpes region and growing. Due to its completely de-central structure, each region maintains its own map of initiatives indicating where and when to find an AMAP and whom to contact to become a member to receive regularly fresh and organic food products from small regional producers. For most each département of the region,  a Google Map is available to the public. Such maps are the most visited pages of the organization’s website! 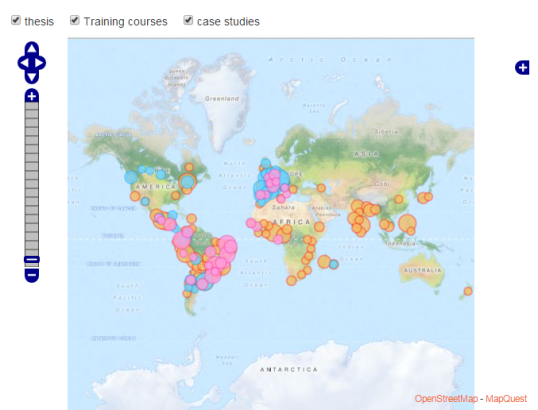 ESS Global/Socioeco.org is a website providing resources about actors, organizations, and knowledge (case studies) relating to the Solidarity Economy (ESS in French). In 2012, three national associations (from France, Brazil, Québec) elaborated a common online query protocol to pull data from their three individual databases and displaying it on a shared map. While still automatically updated, this map has struggled to catalyze the attention that was expected from its initiators. It is, nevertheless, an interesting case as it is one of the rare initiative to pool together data from various non-governmental organizations in the field of the socio-ecological transition.

The equity perspective. In those three cases there are actually a very small number of people involved in the definition of how the platforms/maps are designed, information and the modalities for contribution organized because of the technical barriers to do so. This is not without consequence for the governance of such information resources: indeed, online the governance (of digital commons) is embedded into the computer code (Fuster Morell 2013). It is also striking that in all three cases, only men were in charge of such decisions, confirming the huge gender bias in the computer world. While not significant in those cases, this raises the question of the progress of gender equality among initiatives that rely on online platforms.

The efficiency perspective. However, to its credit, with its cooperative approach ESS Global addresses the fragmentation of information that undermines too often movements like the social and solidarity economy, and reducing the resources allocated to the production of such maps. In the case of PEC in France, it is the exact opposite issue: the use of an off-the-shelves mapping platform (Google Maps) without customization due to a lack of resources doubles the effort for updating data (in the map and in the separate database) and led to the fragmentation in many separate maps. In New York, the very user-friendly Living Lot seems to be also used by employees from the city agencies to get information about vacant land, demonstrating the capacity of a grassroots initiative to deliver a high-quality product with at very low cost.

The sustainability perspective. On the other side of the coin, this efficiency in the use of resources is the result of very limited financial resources. The Living Lot initiative rarely navigates with more than a 2-month financial horizon. With PEC in France, maps are in various states as some regions are not backed by paid staff and updates are more irregular. Moreover, the reliance on Google Maps exposes the organization to a third-party provider. It is also a lack of resources that prevented ESS Global to be further improved and further valued with a more user-friendly and versatile interface. On the more ecological side of sustainability, the issue of energy use related to such online resources is not yet identified as a priority issue.

Generally, the case of ESS Global illustrates the extreme difficulty for different organizations to converge their information structures. Indeed, agreeing on a common protocol to organize data sourced from three different databases proved to be a huge challenge that was solved by adopting economic categories used by the United Nations. This raises questions about the capacity of self-organized actors to craft their own information and knowledge categories without relying on what is being produced by the very existing economic regime they criticize.

About the impact on offline practices

The 596 Acres/Living Lot online map has played an important role for connecting interested neighbors. However, once the connection made, community gardens evolve on their own not relating much anymore with the online platform. In the words of its programmer Eric Brelsford, “from the very beginning the goal was to design an online platform that results in concrete action in the real world”. Thus, the map was systematically printed to be hanged right on site, targeting the local inhabitants who are generally poor and from racial minorities. Conversely, the distance from its community may explain the relative un-success of the ESS Global tool which is more a technical feat.

The CSA maps from PEC in France are the most visited webpages of the organization and quite clearly facilitate the orientation of new and additional members to nearby collectives, but they seem to play little to no role in the actual ongoing operation of the CSA initiatives.

In addition, those maps make a clear contribution to increasing the visibility of specific practices. Although this is hard to substantiate, in New York, the online map 596 Acres/Living Lot has also probably contributed to make the issue of land vacancy and the practice of community gardening more visible to local politicians and their administrations. The maps of CSA in France give a feel of the extent of the development of CSA and are also useful for networking the initiatives with one another.

While being the most technically advanced of the three cases, Living Lot is no tech gadget. Its incremental development has probably ensured its adaptation to real needs of communities. In the end, the online tool remains only one component of the daily operation of the grassroots organization: technology remaining only a means.

[1] If you want to know more about TransforMap, you can access the forum of the participative initiative here and get involved!
[2] Data was collected through individual interviews and online documentary research.

5 thoughts on “Field report #1 : Maps for CSA, community gardening, and the solidarity economy”

PhD student at Humboldt University in Berlin. Researching the interaction between the collaborative internet and sustainability transitions Contributor of Transformap initiative Co-founder of the transition>>lab at Thinkfarm Berlin
Loading Comments...
Comment
×
%d bloggers like this: