On 12th of May Chelsea, Derek, Gina, and Genevieve from Enspiral shared their experience with Thinkfarm Berlin.The goal of this Talk was to present the Enspiral model and in particular how money is managed as a commons as well as share insights with contributors of the Thinkfarm Berlin and some other guests. 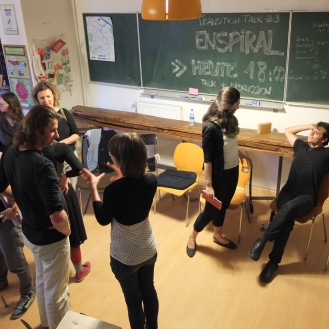 But first what is Enspiral? The answer isn’t straightforward. On its website Enspiral is defined as follows:

Enspiral is a virtual and physical network of companies and professionals working together to create a thriving society.

During this sharing session our 4 friends presented various aspects:

There was a lot more in this session, but one cannot report about everything! Here is a video documentation of the first 30 minutes:

We didn’t have time to look at how contributors concretely allocate money. Here is a graph that describes how Alana Krause (or any other contributor) manages her money :

A great article and video by Alanna Krause present more in-depth how the internal economy inside Enspiral works.

More in-depth information about how Enspiral works is being gathered in the Enspiral Handbook.

PhD student at Humboldt University in Berlin. Researching the interaction between the collaborative internet and sustainability transitions Contributor of Transformap initiative Co-founder of the transition>>lab at Thinkfarm Berlin
Loading Comments...
%d bloggers like this: